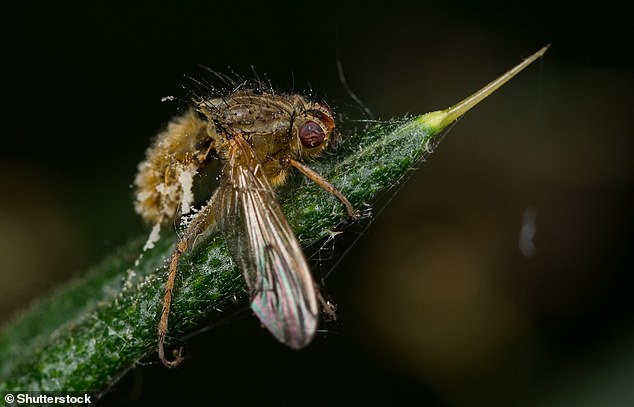 Healthy male houseflies respond to the intriguing mix of chemical compounds by mating with the dead zombie female, ensuring the fungus’ spread.

After E. muscae infects houseflies, it penetrates their skin, grows spores throughout their body, digests their guts and kills them in five to seven days.

A fly killed by the killed by Entomophthora muscae fungus, which ascend to a high point and spread their wings to spew spores from their abdomen

HOW DOES E. MUSCAE USE HOUSEFLIES?

It grows throughout the flies’ bodies, digesting their guts and killing them in five–seven days.

The fungi can even hijack the insects’ brains — forcing them to land on a surface and crawl upwards to give the parasite a better shot at spreading.

On the fly corpse, the fungi grows an array of tiny spore cannons to infect other flies that come nearby.

The fungus infects both male and female houseflies, but the new study, led by researchers at the University of Copenhagen, focused on the effect of female infection to attract male flies.

The scientists gave male flies the option to mate with infected and non-infected dead females.

‘Healthy males are attracted to fungus-killed cadavers [dead bodies] and engage in courtship and mating attempts, which significantly increase infection of new host individuals and thereby ensures transmission of the fungal pathogen,’ the authors say.

‘Infection with E. muscae induces changes in the volatile chemistry that attract house flies by both altering the levels of cuticular fly hydrocarbons and by producing several unusual volatile compounds.’

The ‘unusual volatile compounds’ include a class of chemicals called sesquiterpenes, not previously associated with house flies.

Sesquiterpenes have already been found to be attractive in several other insects, the researchers report, including the Asian honey bee and bumblebees.

Previous studies have already detailed E. muscae’s ruthless process of infection. Its genus name, Entomophthora translates to ‘destroyer of insects’ – and it’s no surprise why.

Once infected, spores called conidia are produced from the fly – a process called sporulation.

E. muscae causes flies to ascend to a high point and spread their wings like a marionette on a string, to eventually spew the spores from their swollen abdomen.

The fungus invades the fruit fly’s nervous system and forces it to embark on the fatal climb, known as ‘summit disease’, before devouring the brain and muscles.

Entomophthora muscae turns its victim into a zombie. Once infected, E. muscae causes flies to ascend to a high point and spread their wings like a marionette on a string, to spew spores from their swollen abdomen

When the fly is dead, the fungi grows an array of micro-sized stalks on the corpse, each one a pressurised cannon of liquid with a spore that can be ejected outwards.

Unfortunate male flies are attracted to ‘zombie’ female fly corpses – and when they accidentally trigger the cannons, they end up coated in a spray of infectious spores.

This ensures that the fungal spores are dispersed as widely as possible so the gruesome process happens again on another fly.

Overall, the E. muscae infection process itself is not different between male and female houseflies.

Now, the researchers show that it’s not only the altered size and appearance of the dead fly that attracts unsuspecting males, but the potent compounds, which act as something of a love potion.

They found a significant increase in mating attempts when the dead female was in a late stage of sporulation – a crafty trick to maximise chances of further infection.

On the fly corpse, the fungi grows an array of tiny spore cannons to infect other flies that come nearby

‘Close physical contact in late stage of infection increases the chance of fungal transmission because there are more infectious conidia compared to the early stage where the conidiophores are just maturing,’ the team explain.

Genome analysis also showed that late killed had a higher expression of several key enzymes known to trigger the production of various compounds including ‘long-chained alcohols and esters’.

After infecting males as well, researchers found many fungus-produced volatile compounds that were similar between infected male and female cadavers.

However, there were differences in quantities of some of these compounds between a male and a female.

‘Some compounds which are linked to a female sex-pheromone function that could stimulate male sexual behaviours were increased in infected female cadavers,’ study leader Andreas Naundrup told MailOnline.

The study focused on females because males are thought to be more likely to come into contact with spores via sexual contact with an infected female.

‘So besides both males and females being attracted to the conidia, the males will additionally have a sexual attraction to the conidia-ridden cadavers, which they physically associate with through copulation attempts,’ Naundrup said.

Interestingly, release of the chemicals during infection, and the initial volatile attraction of the fungus’s next victim, could even be related to feeding.

‘The negative effect on mating imply male house flies investigate or feed off the surrounding conidia rather than being stimulated to mate,’ the team say.

This research is detailed as a preprint, yet to be peer-reviewed, on bioRxiv.

FUNGI THAT TURN ANTS INTO ZOMBIES HAVE ADAPTED TO CLIMATE CHANGE

A parasitic fungus that turns carpenter ants into ‘zombies’ is learning to adapt to the changing climate, a 2018 study revealed.

The fungus is known to infect carpenter ants and cause them to clamp onto hanging vegetation, where they dangle for months to spew spores.

But, researchers at Penn State University have found that zombie ants don’t always bite onto the same part of the plant.

According to the study, this is because the choice of leaves or twigs boils down to the local climate – and, as conditions continue to change, the fungi have been forced to adapt.

‘In tropical areas, zombie ants bite onto leaves, but in temperate areas, they bite twigs or bark,’ says David P. Hughes, associate professor of entomology and biology at Penn State.

Zombie ants – and the species-specific fungi that infect them – can be found all over the world, with the exception of Europe.

In Germany, however, the discovery of a fossilized zombie ant indicates they once lived in the region, and likely went extinct.

Ants become infected by the fungus as spores fall from above and cling to their bodies and use it as a source of nutrition.

The fungus multiplies inside the ant and is eventually able to manipulate its movement, forcing it to climb high into the branches and bite down to clamp on.

Tropical forests provide leaves for them to bite all year around, as they’re mostly evergreen. Temperate forests, on the other hand, drop their leaves in the fall.

‘In the late summer and early fall there are both leaves and twigs everywhere the ants reside,’ said Raquel G Loreto, postdoctoral scholar in entomology at Penn State.

‘But in temperature areas the trees are deciduous and lose their leaves in the fall. There, the ants bite onto twigs.’

The fossil found in Germany is estimated to be about 47 million years old. At the time, the ant bit onto a leaf in the wet evergreen forest.

As the climate has changed over the several millennia and temperate forests grew, the fungi evolved to hold onto twigs or bark.

‘Some of the ants do not simply bite the twigs, but wrap their back legs around the twig and hold on,’ said Loreto. ‘They probably do this because biting twigs is not enough to hold them on.’

In the study, the researchers investigated three separate areas to see how the zombie ants’ behaviour differed.

While leaf biting was the ancestral trait, the researchers determined that twig biting convergently evolved at different times and different places around the world – North America and Japan.