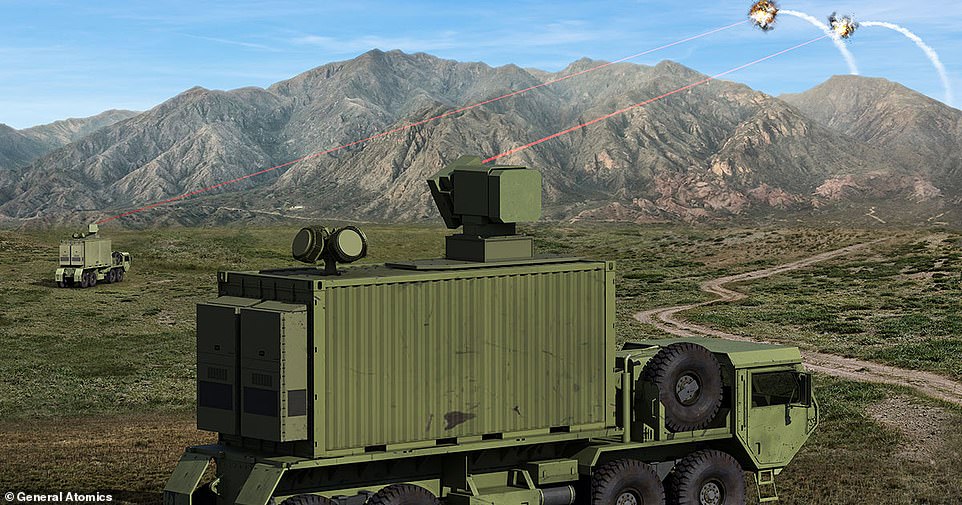 The U.S. military has commissioned the building of a 300 kilowatt solid state laser to destroy drones and missiles amid rising concern over China’s new hypersonic missiles.

The Distributed Gain High Energy Laser Weapon System laser, which some have called the U.S. military’s ‘most powerful laser weapon to date,’ will be developed by a General Atomics and Boeing partnership.

When delivered, the 300 kilowatt distributed gain laser will have an integrated Boeing beam director.

The contract was awarded on October 25, just days after it was reported that China stunned the world, performing a second test in August of what is believed to be a hypersonic orbital missile capable of carrying a nuclear warhead.

If the laser is successfully developed, it could destroy a number of objects, from small drones to missiles

Beijing has acknowledged one of the tests, claiming it launched a ‘peaceful’ civilian spacecraft. But analysts believe the craft can actually be tipped with a nuclear warhead which would be able to evade missile defenses.

Even government scientists are struggling to work out exactly what the new craft is capable of, with one source telling the Financial Times that it appears to ‘defy the laws of physics’ and is unlike any technology the U.S. is known to have.

If the laser is successfully developed, it could destroy a number of objects, from small drones to missiles, PopScience reported.

‘The high power, compact laser weapon subsystem prototype that GA-EMS will deliver under this contract will produce a lethal output greater than anything fielded to date,’ said Scott Forney, president of GA-EMS in a statement.

‘This technology represents a leap-ahead capability for air and missile defense that is necessary to support the Army’s modernization efforts and defeat next-generation threats in a multi-domain battlespace.’

General Atomic’s vice president for lasers and advanced sensors Dr Michael Perry said the laser is a ‘packaged version’ of the seventh generation design that has already been demonstrated.

‘The laser system employs two Gen 7 laser heads in a very compact and lightweight package. Recent architectural improvements have enabled our single-beam DG Lasers to achieve comparable beam quality to fiber lasers in a very simple design without the need for beam combination.’

By focusing the beam of light on an object such as a hypersonic missile, it could burn through it, assuming the laser has enough time and power to do so.

In an interview with PopScience, Dr Perry said the 300 kilowatt HELWS could intercept a ‘wide variety of threats ranging from cruise missiles, manned aircraft, unmanned aircraft and rockets/artillery.’

China, the US and Russia are engaged in a global arms race that now includes the development of hypersonic missile technology. Here, DailyMail.com has compared (from left) each country’s main nuclear weapon, the latest hypersonic technology they have tested, their most up-to-date aircraft carriers, main battle tanks, and cutting-edge jets

Last month, the U.S.’s second-highest ranking military officer, vice chairman of the Joint Chiefs of Staff General John Hyten, said the public should be worried that China has completed ‘hundreds’ of hypersonic missile tests, while the U.S. has done less than 10.

‘What you need to be worried about is that in the last five years, or maybe longer, the United States has done nine hypersonic missile tests, and in the same time the Chinese have done hundreds,’ Hyten said a Defense Writers Group roundtable, according to reports.

‘Single digits versus hundreds is not a good place.’

Beijing subsequently acknowledged the August test, but said it had taken place on July 16. Intelligence sources now believe the test which the FT initially reported and the test acknowledged by the Chinese are different.

The British newspaper reported the first test took place on July 27, before a second test of the same technology a little over two weeks later, on August 13.

Observers say the weapon appears to be an update of Cold War-era Soviet technology called a ‘Fractional Orbital Bombardment System’ – or FOBS.

Soviets developed the technology to get around powerful US radar arrays designed to detect the launch of intercontinental ballistic missiles (ICBMs) tipped with nukes, and defense systems designed to shoot them down.

FOBS works by putting the nuclear warheads into a low-Earth orbit, allowing them to circle the globe and maneuver in flight before coming down on their targets.

This makes the warheads harder to detect, track and destroy than those carried on board ICBMs.

China appears to have updated the concept by fitting the nuclear warhead on to a ‘hypersonic glide vehicle’, which is designed to travel faster and maneuver easier – making it even harder to stop.

Several countries, including the U.S. and Russia, are developing their own hypersonic glide vehicles – though neither of them have put them to the same use as China.

The U.S. laser weapons systems have had some success, albeit on the smaller end of the spectrum.

In February, DailyMail.com reported that the Army was developing the ‘most powerful’ laser in history that could vaporized targets using short pulses.

In 2014, the U.S. Navy deployed the Laser Weapon System that was capable of burning through the metal exterior of rockets with a beam strength of 30 kilowatts, PopScience reported.

Last year, the Navy demonstrated the 150 kilowatt the Laser Weapon System Demonstrator atop the USS Portland.

A weapon of twice that strength could have a considerable impact on any missile or inbound object from a foreign enemy, officials believe.

The 300 kilowatt laser is capable of being powered by batteries or a power grid, allowing for maneuverability.

However, if it is powered by a battery, the batteries will eventually need to be recharged, which could impact strikes.

The longer the beam is on, the more powerful it can be and go after targets if multiple sizes, in as little as seconds.

Perry told PopScience that the higher power would be used for ‘some targets,’ though he did not specifically mention a certain type.

‘For softer targets that can be destroyed with a lower power laser, the extra power can be used to increase the engagement range and/or dwell time,’ Perry added.

‘We’re excited to take the next step in delivering this critical capability to the Army,’ said Cindy Gruensfelder, vice president and general manager of Boeing’s Missile and Weapon Systems division.

‘Our joint offering will leverage proven, deployed technologies to provide an industry-leading solution on an accelerated timeline.’

What is the new ‘weapon’ that China has tested?

Intelligence sources say Beijing has tested two nuclear-capable hypersonic vehicles that flew around the planet in low-Earth orbit before coming back down.

If confirmed – Beijing denies it, saying it actually tested a civilian spacecraft – then it marks a major jump in the country’s nuclear program, though the concept itself is nothing new.

The idea behind China’s ‘new’ weapon actually came from the Soviets, who developed it during the Cold War.

Called a Fractional Orbital Bombardment System, or FOBS, it was designed to evade powerful US radar arrays and missile defense systems.

Those systems work by detecting launches of ICBMs – very long-range missiles that can be tipped with nuclear warheads – tracking them into space and then firing at the warheads as they come down in the hope of blowing them up before they hit their targets.

This is possible because ICBMs and their warheads follow a predictable trajectory that rises high above the horizon – making them relatively easy to spot and allowing defense crews to calculate where they are aimed so they can be shot out of the sky.

FOBS is designed to negate these defenses by firing warheads along a much-flatter trajectory that is assisted by Earth’s gravity.

This means the warheads pass under the scope of many radar detection arrays and are harder to track. It also makes the warheads much harder to shoot down because their trajectory is harder to calculate.

In addition, using orbit to carry the warheads makes their range potentially unlimited, meaning they can be fired at its target from any direction.

This helps to avoid radar systems which are generally pointed at a fixed spot in the sky – in America’s case, over the North Pole.

Soviet Russia had a FOBS system – comprising, at its peak, of 18 R-36O missiles – which were active from 1969 until 1983 when it scuttled the program in response to changes in America’s missile defense systems.

China now appears to be pursuing the technology anew, while coupling it with a new ‘hypersonic glide vehicle’ to carry the warheads.

The ‘HGV’ is thought to make the warhead easier to maneuver while in orbit and increase its accuracy. Despite its ‘hypersonic’ name, it actually travels much slower than ICMB warheads – some 3,800mph compared to 15,000mph+ for ‘traditional’ nukes.

Russia and the US are both developing HGVs of their own, though neither has put them to use in the same way as Beijing.

Moscow has one that can be fitted to its latest Satan 2 ICBM, while the US is working on one that can be launched from a B-52 bomber – though two recent tests of the system have failed.