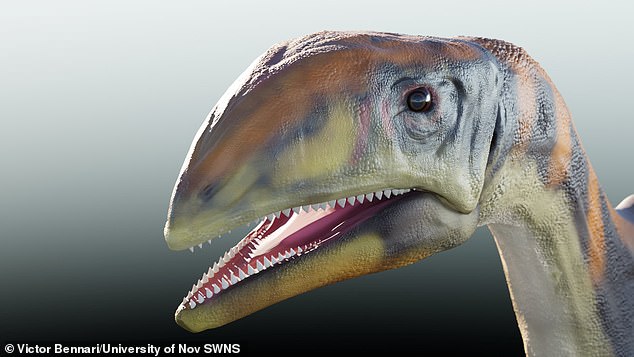 A newly-discovered species of dinosaur that reached 13 feet long, five foot tall and weighed up to a tonne was an ancestor of diplodocus, scientists have revealed.

Previously mistaken for an already-existing species, Cold Bone lived during the late Triassic period approximately 214 million years ago when East Greenland was connected to Europe.

Weight: Up to a tonne

Cold Bone belongs to a group of long-necked dinosaurs called the sauropodomorphs, which includes the sauropods.

Some of the largest terrestrial animals of all time later evolved from this group, including diplodocus.

An international team of palaeontologists from Brazil, Portugal, Germany and Denmark have detailed the species in a study published in the journal Diversity.

‘Compared to the long-necked dinosaurs that came after, Issi would have been a very small animal,’ said study author Victor Bennari at the Universidade Nova de Lisboa, Portugal.

‘Some sauropods could reach over 80 feet in length and weigh more than 65 tons.’

The new species is among the first sauropodomorphs to have lived on the northern hemisphere, the researchers say.

It was a medium-sized, long-necked dinosaur, and the first sauropodomorph to have reached latitudes over 40 degrees north (about level with central Spain and northern California).

The remains – two almost complete skulls – were recovered by palaeontologists from Harvard University in expeditions to Greenland during the early 1990s.

But the scientists have only just properly studied the remains and classified it as a new species.

To study the material, both skulls were scanned using micro-CT-scan and segmented, which allowed for the visualisation of internal structures and bones that were still covered by sediment.

The researchers then created 3D models of the remains that are available for download on the website MorphoSource.

The two skulls once belonged to a juvenile and a possible subadult. Differences between the two are minor and relate solely to proportions, showing that they’re of the same species.

‘The two not fully grown specimens of Issi we have would probably be in the range of four to five metres length [13 to 16 feet] and a maximum of 500 to 600 kg,’ study author Dr Oliver Wings at Martin Luther University Halle-Wittenberg in Germany told MailOnline.

One of these specimens was initially assigned to Plateosaurus, an iconic Triassic sauropodomorph found in Germany, France, and Switzerland.

But during a new assessment, the dinosaur fossils were studied in detail by Victor Beccari at the NOVA School of Science and Technology in Almada, Portugal.

Pictured, the team’s paleontological dig in Greenland. The newly discovered plant eater was over 13 feet long, five feet tall and weighed up to a tonne

Beccari noticed anatomical differences in the skull bones, allowing him to separate the Greenland dinosaur from the European Plateosaurus.

‘The two skulls are unique in many aspects of their anatomy, such as their bone proportions and shapes,’ said Beccari. ‘These specimens certainly pertain to a new species.’

During the Late Triassic period, East Greenland was connected to what is now Europe.

But during Cold Bone’s lifetime, the supercontinent Pangaea broke up and the Atlantic Ocean began to form.

So Greenland was a transitional environment between the dry interior of Pangea, and the humid peripheral parts of the continent.

At this point in time, the fauna of East Greenland was diverse, with large fishes, amphibians, phytosaurs, pterosaurs, and some of the first dinosaurs.

‘Back then, the Earth was going through climate changes that allowed for the first plant-eating dinosaurs to reach Europe and beyond,’ said study author Lars Clemmensen at the University of Copenhagen.

While dinosaurs are known for almost complete skeletons and numerous trackways in Jameson Land, East Greenland, only a few of their bones are already prepared and they never have been thoroughly described.

Sauropod dinosaurs (pictured) walked on four legs and had distinctive long necks. They were widespread – their remains have been found on all the continents except Antarctica

Cold Bone differs from all other sauropodomorphs described so far by a set of unique features, but also show similarities with Brazilian dinosaurs, such as Macrocollum and Unaysaurus.

Together with the European Plateosaurus, these dinosaurs and Cold Bone form the group of plateosaurid sauropodomorphs.

Plateosaurids were bipedal and gracile animals, reaching around 10 to 30 feet (three to 10 metres) in length.

Sauropods were the first successful group of herbivorous dinosaurs, dominating most terrestrial ecosystems for more than 140 million years, from the Late Triassic to Late Cretaceous.

They had long necks and tails and relatively small skulls and brains.

They were widespread – their remains have been found on all the continents except Antarctica.

They had nostrils high up on their skulls – rather than being located at the end of the snout like those of so many other terrestrial vertebrates.

Some fossils shows that these nostril openings were so far up the skull that there were very close to the eye openings.

Sauropods such as the Diplodocus began to diversify in the Middle Jurassic about 180 million years ago.