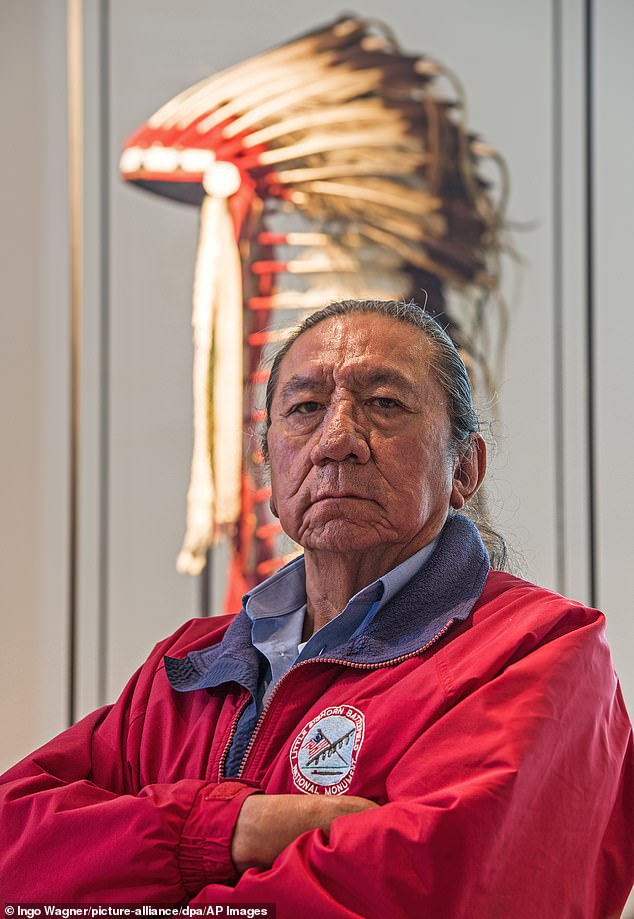 A geneticist who wished to prove a man was a famed Native American tribal leader’s great-grandson was asked to attend a séance to seek permission from the late chief’s spirit to test a lock of hair.

In an exclusive interview with DailyMail.com, Danish evolutionary geneticist Eske Willerslev, the man who confirmed the relationship, says he was asked by Ernie LaPointe, 73, to test a lock of Sitting Bull’s hair in order to verify the theory, but not before LaPointe insisted he take part in a Native American ritual to verify his intentions.

‘I told [Willerslev] to come to my home on December 15, 2007 when we will hold a ceremony,’ LaPointe told DailyMail.com during a phone interview, referring to a conversation he had with the geneticist.

‘We need to find out if your intentions are noble and then you can ask Sitting Bull yourself.’

The ceremony took place in LaPointe’s South Dakota basement and involved a medicine man, drummers and singers who conjured up the spirit of the late chief of the Lakota tribe.

The medicine man sat in the middle of a circle with Sitting Bull’s lock of hair and wool leggings and began shaking a rattle-like instrument in the pitch-black room.

Science may have confirmed that Ernie LaPointe (pictured), 73, is Sitting Bull’s great-grandson, but the famed Native American leader of the Lakota tribe may have returned from the grave to help prove the point

LaPointe said he told Sitting Bull’s spirit that Willerslev wanted to use the items to perform a DNA test to prove their lineage.

‘I tried to explain it is another way of connecting myself and my sisters to him,’ he said.

‘He told me ‘If I told people you are my grandson that is all they need to know,’ but his spirit allowed Willerslev to conduct the testing.’

While this was happening, a blue, green light appeared in the middle of the room that startled the Dutch geneticist.

‘The light started moving around the room and it came to me and moved all around my body,’ Willerslev told DailyMail.com over the phone.

‘I am a natural scientist, so I thought it was the medicine man running around with a light.

‘It struck my face and then disappeared. After the ceremony I asked Ernie what the light was and he told me it was Sitting Bull’s spirit.’

The medicine man told Willerslev that Sitting Bull said for him to take three inches of the hair and LaPointe must burn the rest.

‘I have known about my ancestors through my mother who would tell me stories about them when I was four or five years old,’ said LaPointe.

‘I knew Sitting Bull was my great-grandfather, but I never thought anything about him being famous. When I began telling my story, 99 percent of historians and professors didn’t believe me.’

DailyMail.com can not independently verify the claims of lights at the ceremony, as no footage or pictures were taken. However, DailyMail.com spoke to LaPointe and Willerslev separately and their stories matched.

LaPointe was confirmed to be the late chief’s great-grandson last month, but the journey began when Willerslev started work on the lock of hair shortly after the 2007 ceremony.

First, a thick layer of arsenic – a common way to preserve such artifacts – had to be removed from Sitting Bull’s black hair that was still in a braid from when it.

‘When you looked at [the lock of hair], it looked like it was just cut from his head,’  LaPointe said after the arsenic was removed from the artifact.

In an exclusive interview with DailyMail.com, Danish evolutionary geneticist Eske Willerslev (pictured), the man who confirmed the relationship, asked LaPointe to perform DNA testing on a lock of Sitting Bull’s hair, but not before LaPointe insisted he take part in a Native American ritual to verify his intentions

LaPointe was given a pair of wool leggings (pictured) that belonged to Sitting Bull. He hopes to return the clothing back to his great-grandfather’s remains

‘Eske [Willerslev] had to remove the arsenic and then wait for technology to improve before he was able to extract all the DNA out.’

However, the piece of hair was so small that it was nearly impossible to extract enough DNA for an analysis.

Only a Y chromosome could be taken from the hair, which is passed from the father to the son.

Sitting Bull’s son, Crow Foot, was killed alongside his father on December 15, 1890 and only his daughters had children.

Eventually, Willerslev and his team were able to extract autosomal DNA, which contains the segments of DNA the person shares with everyone to whom they are related, from Sitting Bull’s hair.

Half of a person’s autosomal DNA is inherited from their father and half from their mother, which means genetic matches can be checked regardless of whether an ancestor is on the father or mother’s side of the family.

Once the autosomal DNA was collected, Willerslev analyzed the same genetic material from LaPointe and other Lakota Sioux.

The resulting match confirmed that Lapointe is Sitting Bull’s great-grandson, and his closest living descendant.

‘I think it was amazing [learning the results] and I was also relieved,’ Willerslev added.

‘It’s very sensitive stuff, people have built an identity around this, but sometimes you have to report something that will devastate people’s lives. You hope this is how it will turn out, a happy ending, but as a scientist you must go with your data.’

Danish evolutionary geneticist Eske Willerslev told DailyMail.com that Sitting Bull’s spirit appeared to him as a bright blue, green light during a Native American ceremony in 2007. Pictured is a family photography owned by LaPointe

Although LaPointe has long known he is a direct descendant of Sitting Bull, the DNA results means he has rights over his great-grandfather’s remains. Here is LaPointe holding Sitting Bull’s Winchester rifle

Although LaPointe has long known he is a direct descendant of Sitting Bull, the DNA results means he has rights over his great-grandfather’s remains.

This allows LaPointe to exhume the remains buried in Mobridge, South Dakota, have them analyzed for a separate DNA analysis and then relocated to a new location as he sees fit.

‘The whole area [surrounding Sitting Bull’s grave] smells like urine and alcohol and the monument over his grave is breaking, said LaPointe.

‘This DNA analysis opens the door for me to petition South Dakota to exhume his remains.

‘As soon as everything settles, I will talk to our ancestors to see what the next steps should be.’

Sitting Bull was the leader of South Dakota’s Hunkpapa Lakota tribe, starting in 1886, and is well known for uniting the Sioux tribes of the American Great Plains to fight against the white settlers who took their tribal land.

Most historians say Sitting Bull was born on Standing Rock reservation in North Dakota, but LaPointe said this is inaccurate.

‘I have known about my ancestors through my mother who would tell me stories about them when I was four or five years old,’ LaPointe told DailyMail.com. ‘I knew Sitting Bull was my great-grandfather, but I never thought anything about him being famous. When I began telling my story, 99 percent of historians and professors didn’t believe me’

Sitting Bull was killed by gunshot on December 5, 1890 by Native American police who stormed into the leader’s home in the early mornings. A young man came to Sitting Bull’s aid by shooting at the officers who retaliated by by shooting the chief in the head and chest, killing him instantly. Pictured is atop hat give to Sitting Bull by President Chester in 1883

‘His birthplace is in what is now Montana, about 15 to 16 miles south of Miles City at a place called Pumpkin Creek,’ he explained.

‘It was originally called Bull Horn Creek and was my uncle’s favorite place to go camping.’

According to both LaPointe and Willerslev, Sitting Bull was kind, brave, clever and selfless.

‘For many years, I had poster of Sitting Bull on my door to my office, Willerslev said.

‘Every time I had a difficult decision to make I would ask, ‘What Sitting Bull would do?’

Sitting Bull is also known for his victory in the Battle of Little Bighorn on June 25, 1876 against U.S. federal troops led by Lieut. Col. George A. Custer and Northern Plains Indians, according to Britannica.

The war was due to bands of Lakota and Northern natives who had refused to be confined by reservation boundaries.

Sitting Bull was killed by gunshot on December 15, 1890 by Native American police who stormed into the leader’s home in the early morning.

A young man came to Sitting Bull’s aid by shooting at the officers who retaliated by by shooting the chief in the head and chest, killing him instantly.

‘After my great-grandfather was murdered, they took his wool leggings and cut off his braid as a souvenir, LaPointe said.

‘Then they put his body in a canvas bag and buried him in a pine box.’

‘He didn’t have the proper burial ceremony that someone in his position should have,’ LaPointe added, noting he hopes to give his great-grandfather the burial of a true Native American leader and put the wool leggings back on his body.

Sitting Bull (Tȟatȟáŋka Íyotake) was a Hunkpapa Lakota leader and holy man who led his people in resistance against the policies of the US Government.

He is best known for leading 1,500 Lakota warriors at the Battle of the Little Bighorn in 1876 — during which he wiped out the opposing US forces led by General Custer.

Sitting Bull was shot to death by Indian Agency police on the Standing Rock Indian Reservation in 1890 during an attempt to arrest him.

US authorities had feared he would lend support to the Ghost Dance, a religious movement which promised to being peace, prosperity and unity to Native American peoples and bring and end to American westward expansion.