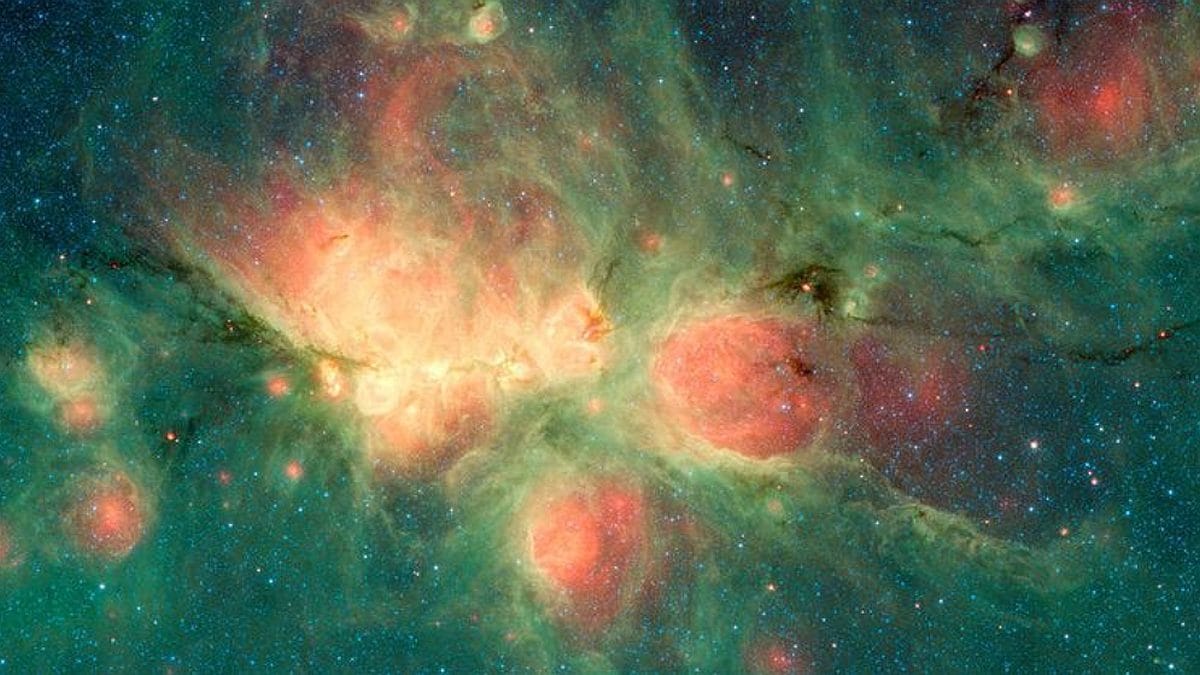 NASA has shared an awe-inspiring image of yet another beautiful nebula in the Milky Way galaxy. Their latest Instagram post shows a dreamy visual of the Cat’s Paw Nebula. The deep field image of the nebula was captured by the American space agency’s Spitzer Space Telescope. The visual shows a thicket of stars peeking through thick green clouds and bright red bubbles. The nebula resembles the footprint of a cat. NASA wrote, “Our Spitzer Space Telescope captured the image of this nebula so named for the large, round features that resemble a feline footprint.”

The American space agency noted that the Cat’s Paw Nebula was “a star-forming region” located “about 4,200 to about 5,500 light-years from Earth”.

In the image, the bright red bubbles and green clouds were highlighted using data from two of Spitzer’s instruments, wrote NASA. The caption added, “Spitzer was an infrared telescope, and infrared light is useful to astronomers because it can penetrate thick clouds of gas and dust better than optical light (the kind visible to the human eye).”

Here is the photo that NASA shared on social media:

According to the NASA website, the Cat’s Paw Nebula is also known as the Bear Claw Nebula or NGC 6334. It is an emission nebula and its red colour originates from an abundance of ionised hydrogen atoms. The lights in this nebula are emitted by the presence of hydrogen, oxygen, and sulphur. “Stars nearly ten times the mass of our Sun have been born there in only the past few million years,” stated NASA.

NASA has been sharing photos of many space wonders with us on its Instagram timeline. Recently, it posted an image of region in outer space where newborn stars were taking shape. The caption compared the “stellar nursery” to “a seasonal cosmic brew”. The image was captured by the Hubble Space Telescope. In the caption, NASA wrote, “One of the most familiar star-forming regions is the Orion Nebula, which can be seen with the naked eye. This region is a similar but more distant example — it’s thought to be about 13,000 light-years from Earth.”

The Helix Nebula grabbed eyeballs in an image shared by NASA a few days ago. With its striking red centre and elliptical blue cloud, the Helix Nebula looked like a giant eye-shaped formation in space. This stunning nebula is 700 light-years away from Earth, located in the Aquarius constellation. The Helix Nebula is among the brightest and closest nebulas to Earth. This, too, was captured by the Spitzer telescope.