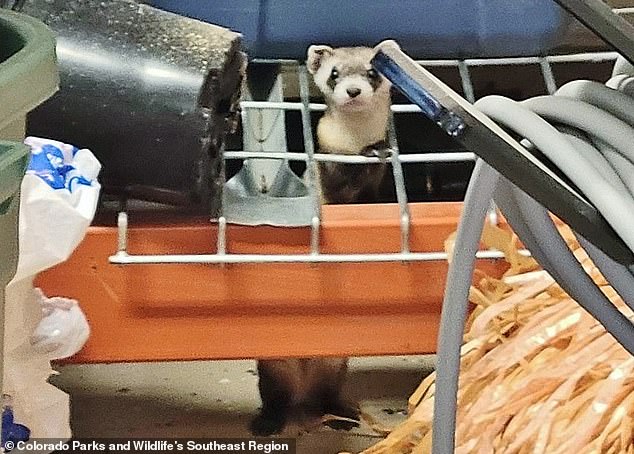 An unsuspecting homeowner in Colorado stumbled upon an extremely scarce discovery from the comfort of their own home ― a black-footed ferret scurrying about their garage.

The ferret, considered the ‘rarest mammal in North America,’ was found in an unnamed homeowner’s garage late on Monday in Pueblo West, Colorado, about two hours outside Denver, according to a statement from Colorado Parks and Wildlife.

It’s unclear how the ferret got into the garage or why it left the colony but the homeowner was able to safely get the animal into a box while waiting for officials to rescue it and return it to safely to the land.

Scroll down for videos

The home is near Walker Ranch where the government agency has released black-footed ferrets on a prairie dog colony in a conservation effort to restore the mammal’s population in North America.

‘We don’t know exactly why this black-footed ferret left the colony,’ said Ed Schmal, CPW conservation biologist, in a statement.

‘We put them into prairie dog burrows but they may not stay. Sometimes they scramble around the colony to find the right home.

‘This one might have gotten pushed out by other ferrets and it went looking for a new home. We really don’t know.’

Schmal added that CPW has only received one other report of a black-footed ferret leaving the ranch, but this is the first time they have heard of a ferret going into a garage.

‘This is extremely rare,’ Schmal continued. ‘Black-footed ferrets are nocturnal and extremely shy.

It’s unclear how the ferret got into the garage, located near Walker Ranch where experts have released the mammals in the past

‘For some reason, this one left the colony and was seeking shelter. We’re just glad it appeared healthy, not starving or sick, and we were able to capture it and return it to the colony.’

Since 2013, more than 120 black-footed ferrets have been released on the ranch, CPW said in the statement.

In addition, they have monitored the colonies and distributed vaccines in hopes of protecting both the ferrets and prairie dogs, their primary source of food and shelter.

Eventually, the black-footed ferret was brought back to the ranch and re-released into the colony

Two weeks ago, nine ferrets were released on a 1,600 acre prairie dog colony near the ranch, the first time reintroduction efforts resumed since the COVID-19 pandemic.

This was done to help officials protect the endangered mammal from the virus.

The officials scanned the ferret’s microchip and determined it was one of the nine that were released on the ranch a few weeks ago.

Upon its return to the colony, the endangered ferret quickly zoomed off into a prairie dog burrow

Eventually, the ferret was brought back to the ranch at night and re-released into the colony, where it quickly zoomed off into a prairie dog burrow, which they use for shelter.

In 2015, scientists used frozen sperm from a ferret known as ‘Scarface’ in an effort to help keep the species alive.

A year later, 35 black-footed ferrets were reintroduced in Wyoming by biologists after a local dog found the last remaining population.

Earlier this year, a black-footed ferret known a Elizabeth Ann became the first endangered species to be cloned in the U.S.

A Wyoming rancher discovered a small population of ferrets on his ranch in 1981, and animals from this group — including Willa — were used to start a breeding program.

In 1988, Tissue samples from Willa were sent to San Diego Zoo’s Frozen Zoo, which maintains a ‘catalog’ of genetic material from over a thousand endangered species.

Conservationists have fought valiantly to preserve the critically endangered animal for decades: the black-footed ferret was listed as endangered in 1967 and considered extinct in the wild in 1979.

There are now thought to be 400 or 500 in the wild, with numbers rising gradually thanks to conservation efforts by zoos, wildlife organizations and Native American tribes.

The species is still threatened by habitat loss a decrease in the number of prairie dogs, their chief food source, caused by a bacterial infection known as sylvatic plague.

WHY IS THE BLACK-FOOTED FERRET AT RISK?

Black-footed ferret populations have severely dwindled in the last century, as illustrated above

According to the US Geological Survey , black-footed ferrets once thrived across mid-continent North America, from southern Canada to northern Mexico.

Over the last century, their numbers have dwindled, causing them to be presumed extinct on more than one occasion.

Their last known range has now been limited to a small region in Wyoming.

Conservationists have worked hard to reintroduce these populations into the wild, spanning the US, Mexico, and Canada, but the outbreaks of sylvatic plague threaten their survival.

This flea-borne plague has wiped out more than 95 percent of the prairie dog population, which ferrets rely on for food and for shelter in their burrows.