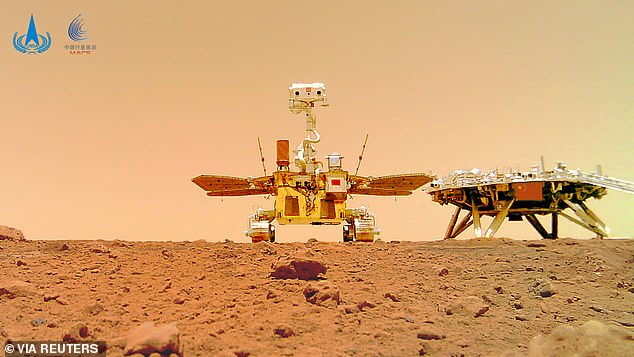 China is working on a ‘complex mission’ to take samples of rock and dust from Mars and bring them back to Earth by the end of this decade.

The China National Space Administration (CNSA) mission will build on the success of its mission to return moon rocks to Earth, and the ongoing Tianwen-1 Mars rover mission, currently searching for signs of life on the Red Planet.

Named Tianwen-2, it could launch as early as 2028, according to Zhang Rongqiao, chief designer of Tianwen-1, speaking at the Deep Space Forum in Shenzhen.

It would be like no other mission that has come before it, Rongqiao suggested, adding it would involve a pair of rocket launches to send a drill and a orbiter.

A joint NASA and European Space Agency (ESA) mission hopes to have Martian rocks on Earth by 2031, but China hopes to beat them to that goal, returning in 2030.

A joint NASA and European Space Agency (ESA) mission hopes to have Martian rocks on Earth by 2031, but now China hopes to beat them to that goal, returning in 2030

Mars is the fourth planet from the sun, with a ‘near-dead’ dusty, cold, desert world with a very thin atmosphere.

Mars is also a dynamic planet with seasons, polar ice caps, canyons, extinct volcanoes, and evidence that it was even more active in the past.

It is one of the most explored planets in the solar system and the only planet humans have sent rovers to explore.

One day on Mars takes a little over 24 hours and a year is 687 Earth days.

A Long March 3B rocket would be used to launch a lander and ascent vehicle to Mars, that will go down to the Red Planet, take samples, and launch from Mars to put them in orbit around the planet.

A separate launch, of a Long March 5 rocket, would send the orbiter and reentry capsules, that would be used to pick up the samples and return them to Earth.

Both rockets are expected to be launched within the same launch window in 2028, reaching Mars at about the same time.

Assuming the mission goes ahead as suggested, China could become the first nation to return samples of another planet to the Earth.

While NASA rovers have been sent to Mars with miniature laboratories on board, bringing samples to Earth will allow for much more extensive analysis.

Mars is increasingly becoming a battleground in the ‘new space race’ that is developing between China and the west.

If China does manage to get their samples back to Earth by 2030, NASA and ESA will only be a year behind.

The European and US mission will return samples already being collected on the Red Planet by the NASA Perseverance rover.

An ESA built ‘Fetch’ rover will be sent to Mars no earlier than 2026 to pick up tubes left on the Martian surface by Perseverance, and an ascent vehicle will put them in Mars orbit.

An ESA-led orbiter will pick up the samples around Mars and bring them back to Earth no earlier than 2031.

Like ESA and NASA building on Perseverance for their sample-return, the Chinese mission will build on capabilities developed for Tianwen-1 Zhurong rover and Chang’e-5 lunar sample-return mission.

China’s ongoing Mars project was its first fully independent interplanetary mission, launching in July 2020 – sending a rover and satellite to the Red Planet.

With the mission they successfully demonstrated they could land a rover on another world, including the entry, descent and landing technologies involved.

The China National Space Administration (CNSA) mission will build on the success of its mission to return moon rocks to Earth, and the ongoing Tianwen-1 Mars rover

Named Tianwen-2, it could launch as early as 2028, according to Zhang Rongqiao, chief designer of Tianwen-1, speaking at the Deep Space Forum in Shenzhen

Tools: Cameras and scientific instruments, including to measure climate and the chemical composition of material found on Mars’ surface

Coupled with the November 2020 Chang’e-5 mission, that returned moon rocks to Earth a few weeks later, China is flexing its space technology muscles.

The missions proved China has the ability to find samples on another world, drill to collect them, launch from another body, rendezvous in orbit, and return to Earth.

Zhang said in a press conference that there were ‘big technological challenges’ involved in bringing samples back to the Earth.

‘We need about two to three years to tackle the core technologies before conducting engineering development,’ he said.

Unlike the NASA and ESA sample return mission, China will not use a rover, but rather simply land a drill on the surface and send it back into space.

They need to make the 2028 launch window in order to get the samples back to Earth by the end of the decade, as there would be a 26 month window before Mars is positioned close enough to the Earth.

Before travelling the millions of miles to Mars, China is first hoping to collect material from a near-Earth asteroid, known as Kamoʻoalewa.

Coupled with the November 2020 Chang’e-5 mission, that returned moon rocks to Earth a few weeks later, China is flexing its space technology muscles

They would be the third nation to achieve this, after Japan and the US, launching in 2024 and named after Ming dynasty admiral and explorer Zheng He.

After dropping the samples off at Earth, the spacecraft will head to the asteroid belt, to study comet 311P/PANSTARRS.

China’s ambitions extend beyond robotic exploration, with plans to send its first crewed mission to Mars in 2033 with the goal of constructing a base and extract resources from the Red Planet.

The ambitious plan will intensify a race with the US to put humans on Mars, with NASA aiming for sometime during the 2030s.

Chinese officials are using the rover to analyze Martian soil and atmosphere, capture images, chart maps and look for water and signs of ancient life

Along with conquering Mars, China is also looking to set up a base in the south pole of the moon, in which it is working with Russia to complete.

Authorities from Moscow and Beijing signed  a memorandum of understanding to launch the project in March to cement the partnership.

‘An international lunar science station is a complex of experimental and research facilities created on the surface and/or in orbit of the moon,’ the memorandum reads.

The base, it continued, would be ‘designed to conduct multidisciplinary and multipurpose research work.’

The Shenzhou-12 spacecraft is launched from the Jiuquan Satellite Launch Center on June 17, 2021 in Jiuquan, Gansu Province of China, carried on the Long March-2F rocket, to Chinese Tiangong space station

April 24, 1970: The first Chinese satellite, Dong Fang Hong 1, was launched from the Jiuquan launch centre in the northwestern province of Gansu. That made China the fifth country to send satellites into orbit, following the Soviet Union, the United States, France and Japan.

Oct. 15, 2003: China became the third country after the United States and Russia to send a man into space with its own rocket. Astronaut Yang Liwei spent about 21 hours in space aboard the Shenzhou-5 spacecraft.

Sept. 25, 2008: China’s third manned spacecraft, Shenzhou-7, was launched into space, where an astronaut clambered out of the spacecraft for the nation’s first space walk.

Oct. 1, 2010: China’s second lunar exploration probe blasted off from a remote corner of the southwestern province of Sichuan.

Sept. 29, 2011: The Tiangong-1, or ‘Heavenly Palace 1’, China’s first space lab, was launched to carry out docking and orbiting experiments.

Nov. 3, 2011: China carried out its first docking exercise between two unmanned spacecraft, the Shenzhou-8 spacecraft and Tiangong-1 module, a key test to securing a long-term manned presence in space.

Dec. 14, 2013: China landed an unmanned spacecraft on the moon in the first ‘soft-landing’ since 1976, joining the United States and the former Soviet Union in accomplishing the feat.

Sept. 15, 2016:China launched its second experimental space laboratory, the Tiangong-2, part of a broader plan to have a permanent manned space station in service around 2022.

Jan. 3, 2019: The Chang’e-4 lunar probe, launched in December, touched down on the far side of the moon. Previous spacecraft have flown over the far side but not landed on it.

June 23, 2020: China put into orbit its final Beidou satellite, completing a navigation network years in the making and setting the stage to challenge the U.S.-owned Global Positioning System (GPS).

July 23, 2020: China launched an unmanned probe to Mars in its first independent mission to another planet.

Nov. 24, 2020: China launched an uncrewed mission, the Chang’e-5, with the aim of collecting lunar material to help scientists learn more about the moon’s origins.

April 29, 2021: China launched Tianhe, the first and largest of three modules of its upcoming space station.

May 15, 2021: China became the second country after the United States to land a robotic rover on the surface of Mars.